Create your own GitHub repository

Pushing, committing, merging and branches. Learn all the Git basics by creating your own repository 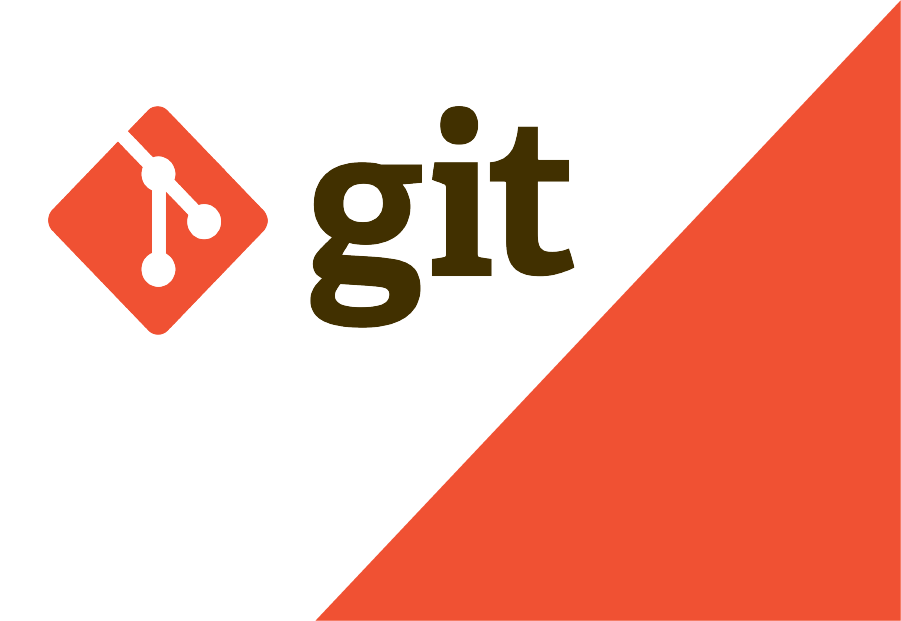 None! This is a tutorial is meant to introduce you to git concepts.

When Should I Use Git?

Git is used generally when collaborating with others, and is helpful even in your own projects. It allows you to look back into the edit history of your project and can even let you work on different versions of the project at the same time!

Repository: folder of stuff which git keeps track of

Commit: a snapshot of all of your files at a certain point in time

History: a series of connected commits. These connected commits describe all of the snapshots you have ever taken and their relationships. Under the hood, git keeps the history as a linked list (where each commit points to the previous commit)

Reference this powerpoint to visualize the flow as you go through the tutorial.

Here's a list of commands to familiarize yourself with what you will be typing into the command line. All of them are in this form: git <command>. We will be going over what most of these do.

to check if you already have git installed

For Windows users, after downloading Git, you will have a choice to use git from the command prompt. For now, elect to not do that. After this, you should have a program called "git bash" on your computer. This is a terminal just like the command line except it supports all Unix commands. Open that program up for this tutorial.

First thing you should do is configure your name and email. This information is vital for each commit you make.

Start by creating a new folder and going into that directory (directory and folder mean the same thing). This folder will contain all of the files you will be tracking the history of.

Next let's get some files! Copy and run these 3 commands:

Great! Now you have a new directory with 3 files in it: README.md, hi.txt, and test.txt.

This command will initialize your git repository. Run this command:

If this is not working for you as a windows user, remember to open up Git Bash

-a makes the ls command list all files including hidden ones. You will see a .git folder. This is where all of your history will be stored and is called the git repository. Feel free to explore it a bit with cd .git. You won't be making any edits to this folder.

You might wonder why we haven't created a github repository yet. We will, but an interesting thing about git is that you don't technically need one to track changes locally.

This command will output something that looks like this:

Let's break this down. Currently you are in the working directory. This is the folder where all of your files are and any changes you make are reflected immediately.

There is something called the Staging Area or Index (I will use these terms interchangably). This is the place to which changes to files are added to so that they can be part of the next commit (read commit as snapshot).

We have already talked about the repository where all of your commits are saved. Here is how those areas are related. 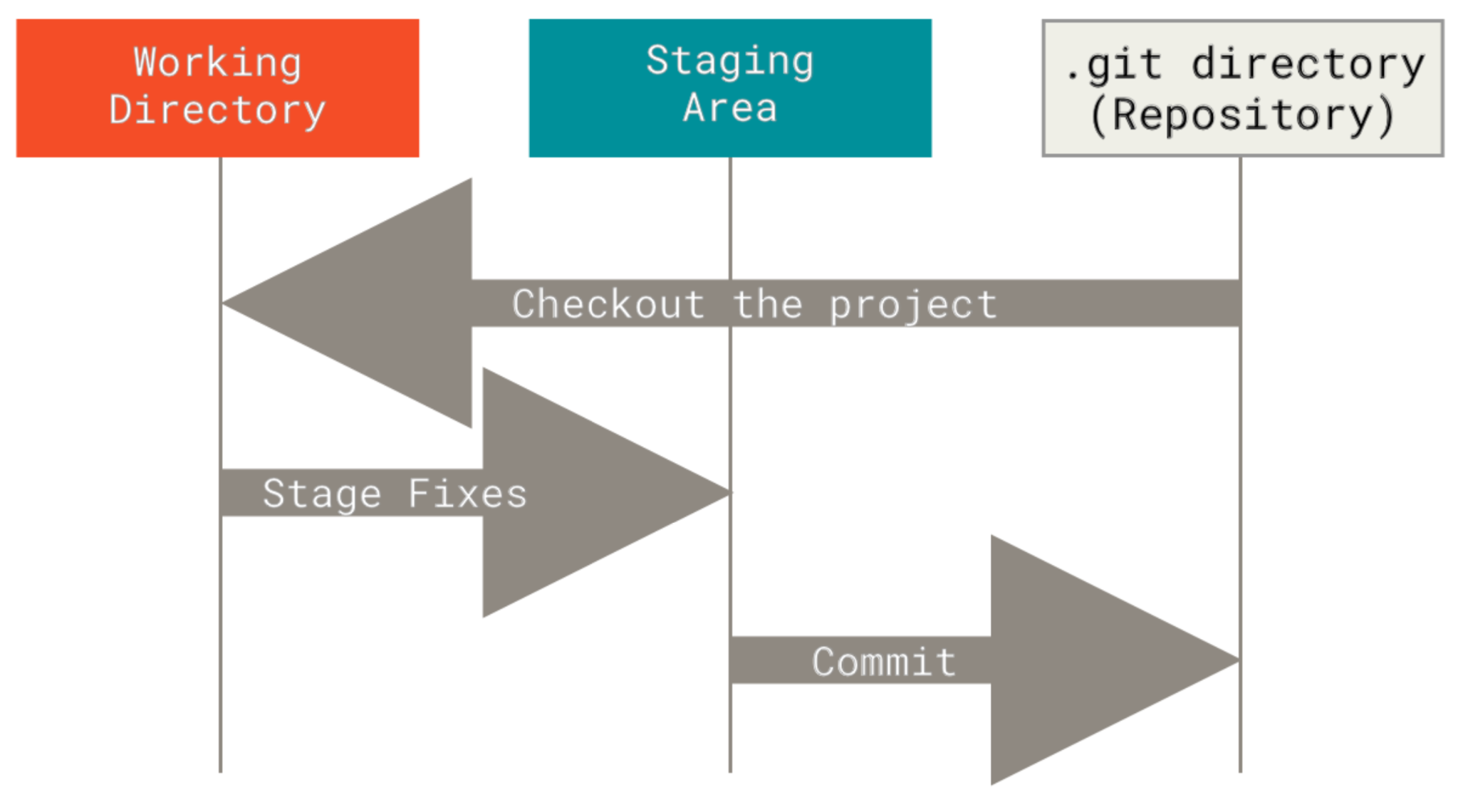 This command puts hi.txt in the staging area. We call that staging the file.

Now check out the output. Should be something like this:

Now hi.txt is ready to be committed. Let's do that.

Great, you just made your first commit! with the -m flag, you attached a message with your commit. Eventually you will have to write meaningful commit messages that describe what you changed to keep everyone working on a project in the loop.

Side note: If you happen to write git commit without the -m you will be taken to vim. A text editor in which you write your commit message. If that happens, write a commit message, save, and exit. This link explains how to do that.

Notice that hi.txt has disappeared from the output since it hasn't been changed since the last commit.

Now add another way to say 'hello' to hi.txt to change the contents of that file. Notice what happens when you run git status again. This time hi.txt is unstaged. It shows as modified.

Now try adding and committing your change to hi.txt.

Here is an overview of the different states of your files. As you can see, git add can bring both an untracked file and a modified file to the staging area as we did with hi.txt.

This diagram has a lot and it's ok if it all doesn't make sense just yet. Take a moment to look at it.

Let's commit everything else now:

See all of your previous commits with:

Notice that each commit has a long string of numbers and letters with it. That is the commit's SHA-1 hash. In the future you will use these hashes to execute other git commands. Also notice the author (from when you git configured it), and your commit message. Press q to exit.

Nice job! Keep going to learn how to work with github.com.

So far we have talked a little about how Git is structured and the basics of the working directory, staging area, and git repository. Now, its time to talk about the remote repository.

Every person that collaborates on a project has the full history of commits and all of the code. So the question is: how do we compare the versions of the repository that each person has? By the end of this tutorial you will understand everything behind this image: 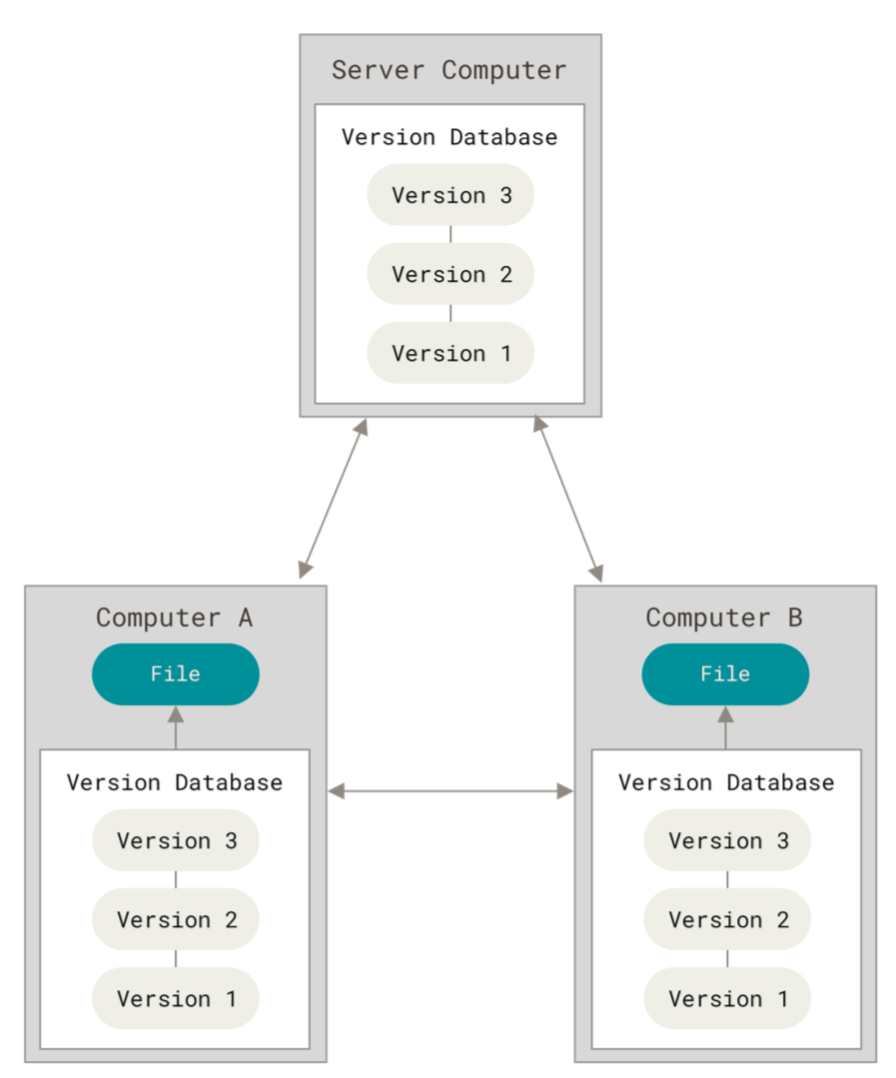 The remote repository here is represented by the Server Computer. This will typically be on github.com. Each of the Computers represents a person working on the project.

Create and Connect a Remote Repository

If you don't have one already, create a github account. This is the most commonly used website for remote repositories. Click New and name the repository Git Starter Tutorial. Set the access level to Public so that anyone can see the repository and you can choose who can commit. Do not initialize with a README.

Great, now you will be presented with a screen with a long url on it. We will be using the https link today.

Now let's connect the remote repository with your local repository.

replace <https link goes here> with the link from your remote repo (short for repository).

You now have a remote repo named 'origin'! You will refer to the GitHub repo as 'origin' in your commands.

It might prompt you for your github credentials and then whoosh! Your code is on the internet. 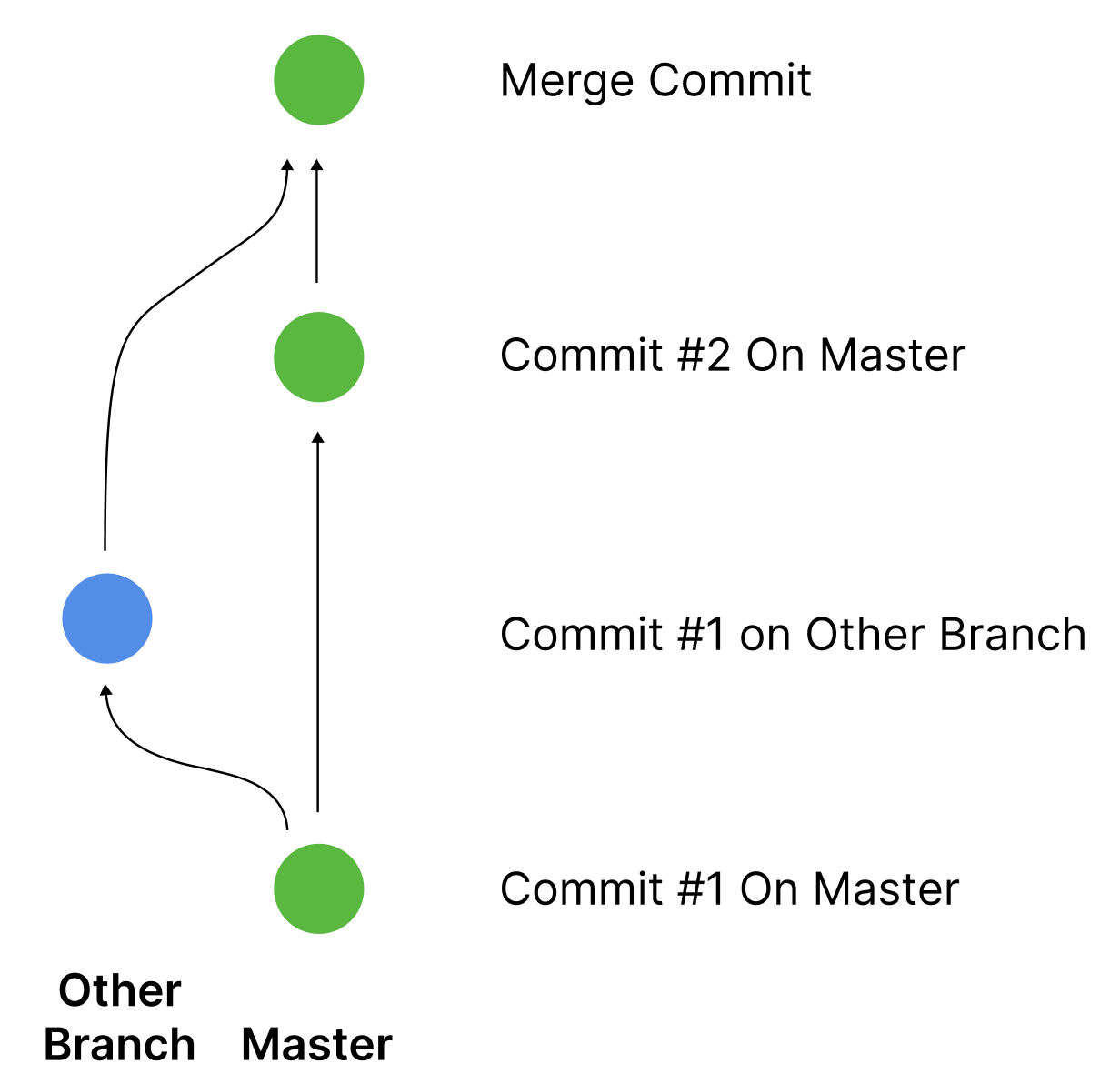 These are useful because you might want to work on an experimental feature, but not create bugs for everyone else.

What happens when there is a merge conflict? This would happen when you and another person have edited the same part of the code in different ways. In more technical language, this means that when you git pull, the changes that are on the remote repository conflict with the changes you have made in your working directory.

Another way conflicts happen is when you try to merge two local branches that have conflicting changes. (Local refers to anything that is on your computer) Under the hood, these two cases are actually almost the same!

git branch creates the branch named feat-53 and git checkout switches to the branch so now your working directory will reflect the feat-53 branch. Currently there are two pointers 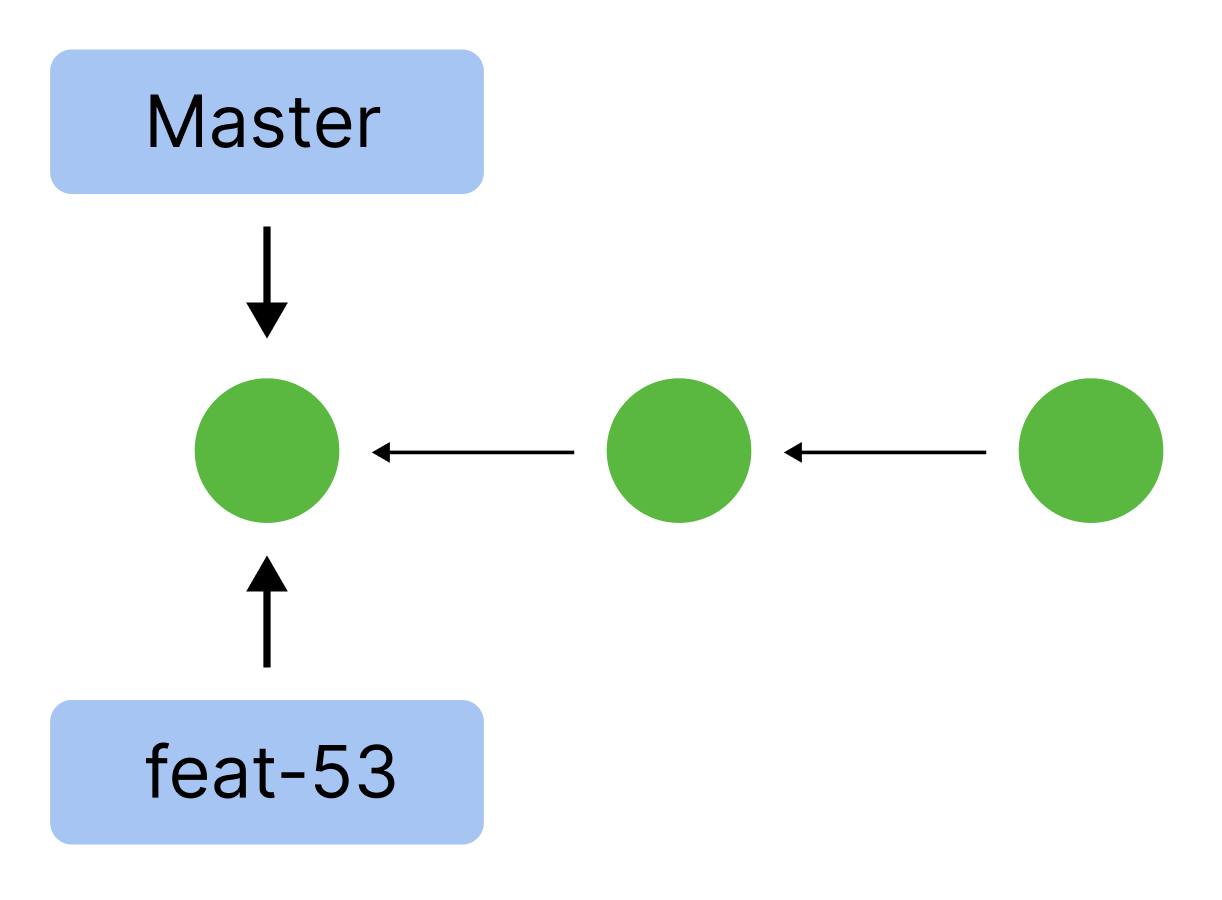 We are following the pointer for feat-53.

Awesome! The output that you should have gotten from your git push will tell you that you created a new branch. But didn't you already create the branch? Yes, but now that new branch you created locally is there on the remote repository. You can go to github.com to check. If you're wondering what a pull request is, we will talk about that in another tutorial. 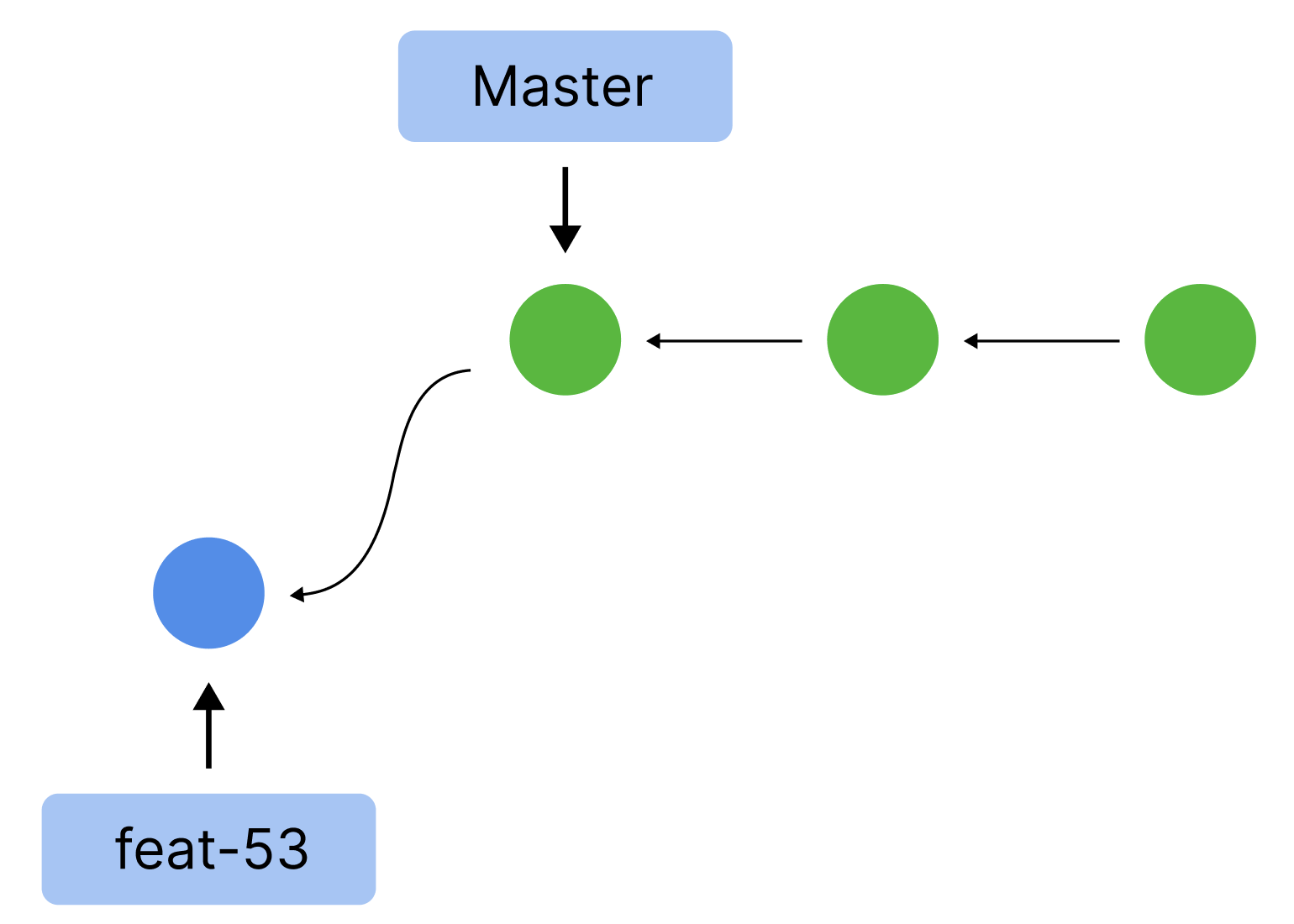 Side note: the commit that the pointer of your branch is pointing to is called the HEAD (all caps).

Now lets switch back to the master branch

Now if you look at test.txt, you will notice that your change is gone. That is because you are now on the commit that the "master" pointer points to. 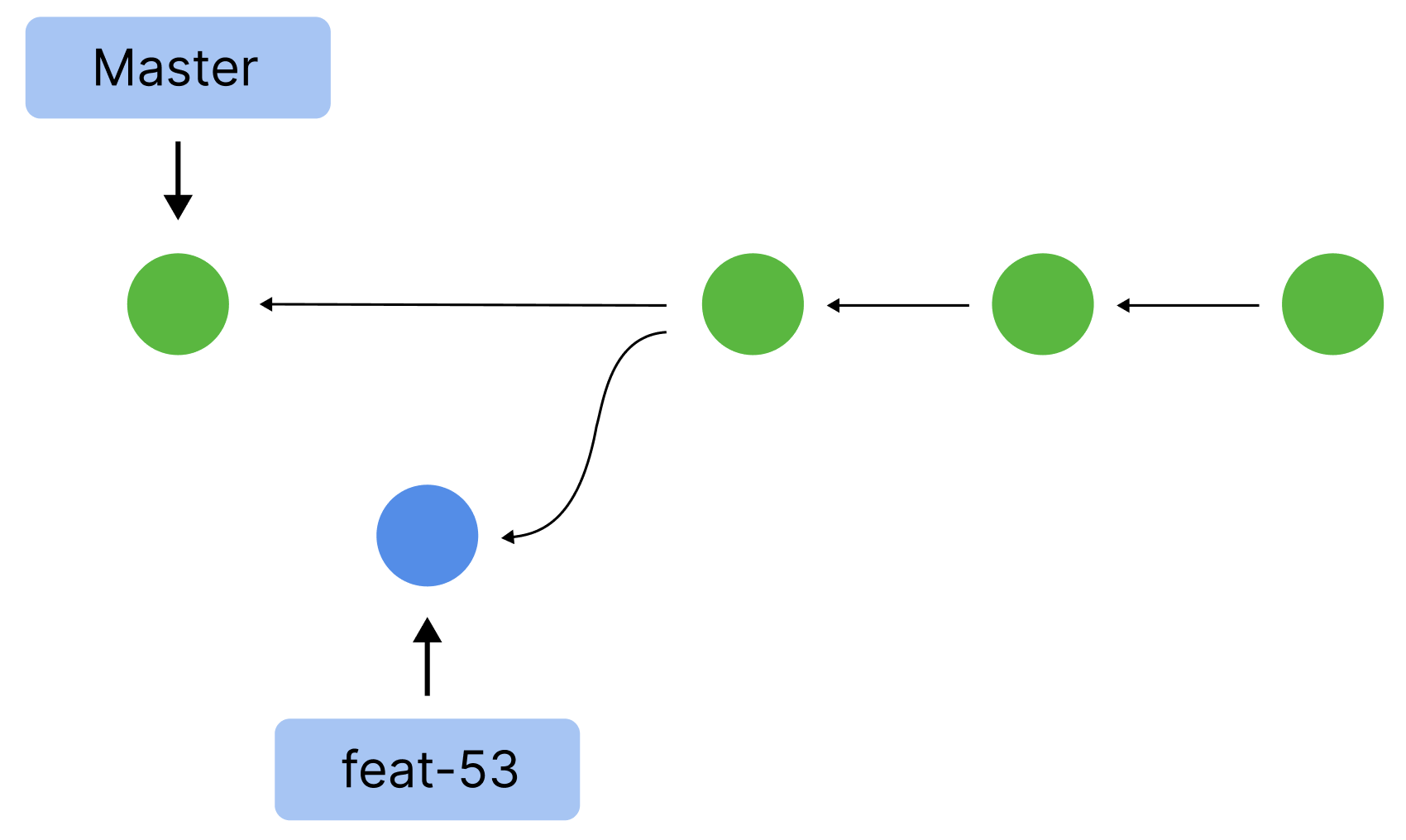 Looks like there's a conflict! Git cannot auto-merge because both master and feat-53 have edited the same line and are now trying to merge.

Open up test.txt (where the conflict is). You should see this:

To fix the conflict you must remove the sideways carets and the equal signs and replace it with the version that we want to keep. Lets keep the feat-53 branch version. test.txt:

Now to complete the merge, we must add the file and commit it.

You have successfully navigated a merge conflict! Your history looks like this now:

We no longer need the feat-53 branch, so lets delete that as well. Deleting the branch only removes the pointer, not the history of the branch.

The first command deleted your local copy of the feat-53 branch; the second command deleted the remote respository's copy of the feat-53 branch. Be wary of deleting a remote copy of a branch because others might still be working on it. Side note: if you deleted your local branch and pushed, it would not delete the remote branch.

Feel free to play around with it! Try making a copy of your repository somewhere else on your computer. You will use this command a lot when building off other people's projects.

You learned about branches, merging, merge conflicts, remote repositories, cloning, and the HEAD. You should now be able to collaborate with others on a project! However, there is much more to Git! Stay tuned for .gitignores and hooks.