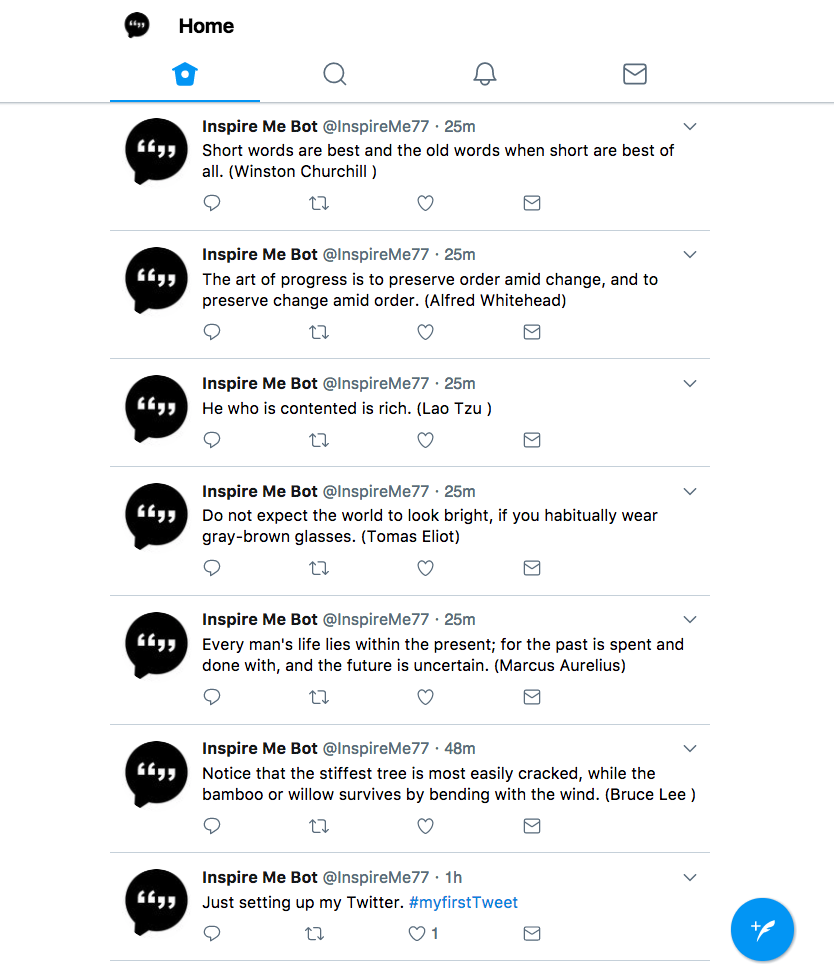 Today, we'll be building our very own Twitter Bot with Node.js. Our bot will fetch a random quote using the Forismatic API and then, of course, tweet it in an attempt to look smart!

First off, make sure you have Node.js and npm installed. Then, create a new folder for your application and cd into it from the command line. Then, run npm init and go through the process to initialize a new node application.

Once we have everything ready to go, create a index.js file where we'll be coding our application.

Let's get started by requiring our modules in our index.js file.

Oh, wait. There's one more step before we actually start writing more code. Since we're building a twitter bot, we need to register a twitter application!

Here, we're defining the variable T and setting it to initialize the Twit library with our application that we registered so we can post, search, favorite, retweet, and basically do whatever we want on Twitter.

To build what we want, we need to fetch a random quote. Luckily, Forismatic's API is very easy to use as we just need a url. You can set the url below as a const as unlike variables, it will not be changed.

One problem that we may run to when building these kind of applications is that since we have to make a request, we want to:

This may look simple - except for the sending data to another function part. To do this in JavaScript, we use something called callbacks. Callbacks allow us to write asynchronous code. This means that to make this program as efficient as it can be, we have to use callbacks.

Let's start by creating a getQuote function with a paramenter that's named callback. Then, using request, we can make a request to the url and set the data of the request to the callback.

Now, we have our data, in this case body ready to be used in another function. The next function we'll be creating is a postTweet function with the tweet parameter. Using T.post, we are able to post with the status (data of tweet) to be tweet.

We've written the two functions. What next? Well, now we need to connect them together! We want getQuote to run first, so we'll need to run it first with the parameter of postTweet which is our callback.

You did it! Save your file and then run node index.js in your terminal. You should see everything being logged and the tweet posted! I encourage you to continue making the bot more advanced using the twit library! If you have any questions, feel free to leave them below :)